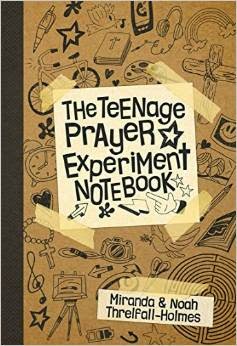 (SPCK). Written by myself and Noah Threlfall-Holmes, my 13 year old son, this book began life as a blog exploring different methods of prayer: I came up with the ideas and he reviewed them. We then found lots of youth groups were using the blog, and we have now gathered feedback and comments on all the various ideas from a wide variety of teenagers from all over the country.
This book is an interactive prayer journal designed for teenagers to use: it encourages you to not just read about prayer, but give it a go, and then review the experience.
An ideal confirmation gift for any teens in your life, or great for a church youth group to work through together.


You can Pre-Order it on Amazon here!

I also have three poems published in 'Learning to Love', ed. Chris Goan (Proost, 2014). This can be ordered or downloaded from the Proost website here.

‘an important study… a detailed and authoritative exploration’ (Reviews in History)
‘a major contribution to the history of the medieval consumer’ (English Historical Review)
Recent conference papers include:
Other academic publications:
In the popular media:
Six articles/columns in the Guardian (Comment is Free column on women bishops debate in General Synod) and Church Times, 2008 (an article on celebrating Lent and Easter more effectively in parishes, and four Prayer of the Week columns).