Towards a Theology of Church Growth

Is Church Growth even more contentious a topic than Same Sex Marriage? On the day that Ireland votes on same sex marriage, it may seem provocative to suggest this. 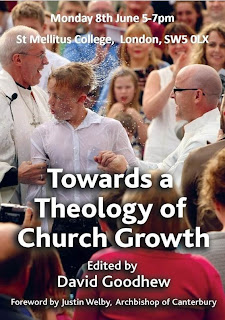 But I think this is the case. The Church of England talks of little else, and it is surprisingly contentious.

Now if you don't go to church you may wonder why on earth the church wanting to grow would be controversial. Most organisations nowadays exist at least in part to evangelise and grow - that is the norm in our capitalist society. Most people also think of personal growth and development as a good thing.

Yet when leaders in the church talk about church growth, they are often decried - not by the angry atheists, but by members of that same church. So why is church growth, as a concept, so controversial?

Partly, this is because we clergy feel under considerable pressure to deliver this growth, and we fear failure.

Partly, it is because we know that growth is not just about numbers - it is as much about depth as breadth.

And partly, it is a reaction against what is often seen as an increasingly managerial approach to the theology of church (ecclesiology). We know that being a good vicar (chaplain, priest, minister...) doesn't always simply equate to extra bums on seats, and we fear the introduction of an Ofsted-culture into the church. Church growth is often derided for being not really concerned with the Kingdom of Heaven but with management metrics. 'Where is the theology?' the cry goes up.


And yet....all the imagery in the Bible for the church implies growth, development, fruiting, building.


A couple of years ago, Durham University held a day conference entitled 'Towards a Theology of Church Growth', and the book arising out of that conference has now been published by Ashgate. You can find it here.


The idea behind the conference was that, although the church leaders who talked about growth were sure that the claims that this was un-theological were unfounded, nevertheless it was a fair criticism to say that the theology had not been fully considered and explained.

I was asked to speak on what medieval theologians said about church growth.One of the key things that the organiser of the conference (David Goodhew) wanted to challenge was the claim that this obsession with church growth was a purely modern concept, and had no counterpart in the historic theology of the church. 'After all', the argument runs, 'In medieval times everyone went to church'. Was this true? he asked me. If so, and even more if not, was there any concept of church growth in the period of medieval 'Christendom'?


This was a fascinating challenge! First of all I had to work out where to look - it was not a question I had considered before, and working out what evidence could be brought to bear on the question took some time. My first idea was to look at archaeological evidence - were church buildings constructed with growth in mind? But as you'll find if you read my full chapter, I quickly had to discard that line of enquiry - there is very little correlation indeed between church building and congregation size in the medieval period. Bigger church buildings said as much or more about the wealth and status of their patron as about the number of people expected to fill them.


There are, however, plenty of examples of local people building additional chapels of ease or places of local worship, nearer to where they lived than the parish church that they legally had to attend and support. These were built, staffed and supported out of the pockets of the laity they served, and provide good evidence for a flourishing lay spirituality.


But the best evidence that I found was in the writings of and about the Friars, and in pastoral letters from bishops to clergy exhorting them to growth. These did not assume that everyone went to church - far from it. Indeed, they sometimes didn't even assume that the clergy knew the basics of their faith! And the passion with which they spoke about growing the church is infectious.

The example that has most stuck in my mind is that of Robert Grosseteste, the famously reforming Bishop of Lincoln in the mid thirteenth century. In 1244 or early 1245, he went on a trip to Rome, and wrote a letter to his archdeacons exhorting them to grow the church in his absence. I wonder how they felt when they read this letter - perhaps a similar rising panic and apprehension to that so many clergy feel now at the latest diocesan directive to grow?

Grosseteste uses very similar 'business' or 'management' imagery to that which is so often decried now. Drawing on the parable of the talents, he uses the image of doing business with the wealth entrusted to you with the aim of making a profit explicitly to refer to seeking and working for numerical church growth.`

I do encourage you to read the whole chapter, and indeed the whole book! You will probably find lots to disagree with, but lots to ponder too.

You may be reassured or appalled to know that an obsession with numerical church growth is certainly not uniquely modern, and that there is indeed a medieval theology of church growth.