'The Silver Sword' and migration


One of the books I remember most from my childhood is Ian Serallier’s The Silver Sword. It tells the story of a young boy in the war who is only just able, with his even younger sister, to escape from their house shortly before it is blown up by the Nazis. The two of them then journey through various occupied countries trying to reach Switzerland, where they eventually find a safe haven with other orphaned children.

There are many other children's books about war that I remember, all of which stimulate the same empathy. From Children of the New Forest to Goodnight Mr Tom, stories of children forced away from home in conflict invite us to imagine how we would cope in similar situations, and give us a glimpse of the human reality behind today's headlines and statistics.


And yet the stories we tell ourselves can also obscure historical reality and so distort our present reactions.

The whole point of the asylum framework that was put in place after the second world war was to avoid a repetition of the situation where thousands more people who could have been saved died in Nazi concentration camps because of precisely the same rhetoric from the British public and press that we are seeing now. We could have saved more, but the population didn't want to be 'swamped'.

History, as we know, tends to be written by the victors: and so the stories we tell ourselves of the war are primarily of plucky Britain in the Blitz, standing firm against the might of Europe. We conveniently forget the other side of things, the appeasement, the fierce debate about whether we should enter the war at all, or whether Hitler didn't really have a point. We celebrate those children who were rescued, but conveniently forget the thousands of children and less photogenic adults who we turned away to their deaths.


The silver sword has been brought back to me recently by images of children living in the bombed out ruins of their houses in Syria, or whole families fleeing before the advance of ISIS. Images of parents clinging to their young children as they attempt to reach Europe or Australia on an over-crowded boat. 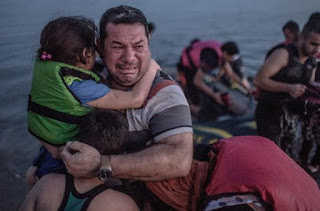 As I write this, the papers are full of the Songs of Praise episode being broadcast from the Calais migrants’ camp. It has attracted a huge amount of comment, both positive and negative.

The Archbishop of Canterbury tweeted his support: “The love of Christ is freely offered to all, celebrated everywhere, for everyone to know, well done #Songs of Praise”.

Others were less keen, with papers such as the Sun and the Daily Mail deriding the broadcast. Michael Sadgrove, the soon-to-retire Dean of Durham, wrote on his blog:

“What's the answer to the scornful Pharisees at The Sun? It's pretty obvious. Just ask what Jesus would do. He would be in The Jungle, of course, just as he kept company with a lot of other people the establishment of his day found it difficult to tolerate. It's not that Jesus didn't maintain a clear head about the weighty matters of the law such as duty and justice. Nor is it that he didn't grasp the endless complexity of human life. It's simply that where he saw people in need of touch, tenderness and a listening ear without the threat of sanction and exclusion, he was there with them.”

I’m glad that most Christian commentators supported the broadcast. I was glad it was broadcast, though I was a bit disappointed, watching it: there was much more focus in the reporting on the migrants trying to reach England, than on their faith. There was a missed opportunity, I felt, to explore Coptic and Ethiopian Christianity, and the spirituality of people who wanted to build a church before a home. Some people mistakenly thought that because the women in the church were veiled, and mainly sat separately from the men, they were 'really' Muslims! There was a missed opportunity to correct such misconceptions.

But it was still good to see the programme engage with something that is a key talking point in most churches around England today. A 'Christian' response to migration must always begin with a recognition of our shared humanity, as human beings all equally created in God's image and for every one of whom Christ was born, lived, taught, died and rose again.

Furthermore, Christianity is full of migration and refugees, both in this country and across the world. I've just returned from the Anglo-Nordic-Baltic Theology Conference, this year held in Finland, and questions of national identity, borders, and language were very real ones, particularly for countries such as Latvia where memories of Russian invasion are still strong and formational. We were very aware of how all such questions need to be discussed in the context of our Christian history of migration, evangelism (sometimes, particularly in Northern Europe, at the point of a sword), and inter-cultural engagement/encounter/conflict in so many different contexts.

St. George, patron saint of England, was a Roman soldier who was probably born in Syria.

St. Alban, the first English Christian martyr, died to protect a Christian priest who was almost certainly an immigrant.

The Bible is full of stories of refugees (most obviously the people of Israel, wandering in the desert in search of the Promised Land), economic migrants (think of Joseph and his brothers), and displaced people (‘by the waters of Babylon I sat down and wept’). Jesus himself, with his parents, sought asylum in Egypt when Herod tried to kill him in his infancy.

Around the world, there are many millions of displaced people. The vast majority are given hospitality and shelter by neighbouring countries, whose generosity and welcome in the face of their own poverty puts us to shame.