I've just received the first pre-publication copy of my new book, 'The Essential History of Christianity'. It summarises the key developments in christian history in under 150 pages, and doing so nearly killed me! I hope it is useful, and (naturally) highly recommend it to anyone starting theology or history courses, and as a Christmas present for everyone you know! 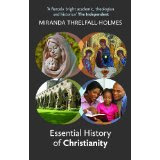 But the more I read it - and I've had to re-read it several times over the past few months, as copy editing and proof stages passed - the more I think that this paragraph from the introduction is  key:

'The history of Christianity can seem a dauntingly large one. It covers 2000 years – more, if its roots and Judaic pre-history are to be adequately accounted for. It covers virtually every corner of the world, and not simply sequentially but in a complex and overlapping sequence of movements, retreats and conflicts. And, as it has been received into different cultures and periods, it has been defracted – like a rainbow in a prism – into a dazzling spectrum of different shades. As a result, there is never a time at which we can point to one, monolithic grouping and say ‘look – there is Christianity as it originally was; now let’s see what happened to it’. Right from the beginning, the movements inspired by Jesus were disparate in geography, outlook, cultural and religious background, social class and nationality. Theological differences in emphasis and in substance were the inevitable result. This seems to have been a logical result of a religion which began, so its adherents believe, with the incarnation (literally, the ‘en-fleshing’) of God in one particular time and place. This is a religion whose main doctrine has never – contrary to much popular opinion – been contained between the covers of a book, but in the lived experience of a human, historical person. It follows logically and inevitably that there is no one ‘correct’ form of Christianity, but as many different relationships to that person as there are people in relationship with him.'

I wonder whether this perspective offers a hint towards a way forward in the seemingly intractable disputes between 'evangelicals' and 'liberals' in the church today? My 'liberalism' is not based on the philosophical liberalism of the nineteenth century. In fact, the more I read about that, the more I feel that 'liberalism', with those connotations, is a bad discriptor of my position - though I like the associations of freedom and generosity, so will be sorry to say goodbye to the word. But my 'liberalism' is fundamentally Christocentric. I am a liberal because I am a Christian, not one despite the other. And that passage - which I found the easiest to write in the whole book - sums up why.

So I wonder if we need a new term, a new label? I wondered about 'Christocentric liberalism', but I fear that the word liberal may be so tarred with old brushes that it is better abandoned. So how about 'Christocentric pluralism'? The belief that, precisely because  we believe in Jesus, we find that we must embrace a plurality of ways of approaching God, and must accept that we cannot prescribe one correct way of being a Christian? That precisely because  of the incarnation, we must accept the huge diversity of faith and lifestyle and personality that exists, even where we don't like it?

And yes, that does mean accepting the existence of those who disagree with this approach! The line that there is 'nothing so illiberal as a liberal'  is rather tired, but it is true that this Christocentric pluralist approach requires an acceptance that the range of views represented in this diversity will include fundamentalism. It doesn't, though, mean we have to agree with fundamentalists or others - simply recognise that their views may well be formed by their own particular circumstances and relationship with Christ, and so are deserving of respect (that word again!).

What do you think?