Church of England Branding Guidelines: No more '3 Men in A Row' Pictures Please!

I've been embroiled in a bit of an argument on Twitter today. The new diocese of WYAD has just consecrated its two new bishops, which is brilliant news. But the picture that was posted in 'celebration' of this was rather dull, and I said so (its been changed on their website now: see the current selection of pics here (much better!).

The ensuing debate got rather heated. In being exasperated with yet another Three-Men-In-A-Row picture, I was accused of wanting 'tokenism' (dragging a woman in kicking and screaming - as if there obviously wouldn't be a woman who merited inclusion on her own terms); or even of being derogatory to the ministry of these new bishops. 'Isn't their ministry worth celebrating?' someone asked. Of course. And better pictures would make it look so much more celebratory.

Back in September, I made the same point when Chelmsford Cathedral tweeted this picture of the new bishops of Barking and Colchester about to be installed:

I tweeted back in some exasperation at such a dull image - asking where were the women? Now this was of course partly influenced by our history as a church over the past couple of years: the fact that all the new bishops at the moment are indeed men is a bit of a sore point, and pictures like this had been rubbing salt into that wound for some time.

To do them credit, the volunteer who runs the @CCathedral twitter feed responded immediately with some lovely other photos of the event. My favourite - which showed the new bishops meeting some of the congregation, and included black and white, children and adults - is no longer on their website, but this one was the other that he or she tweeted then: 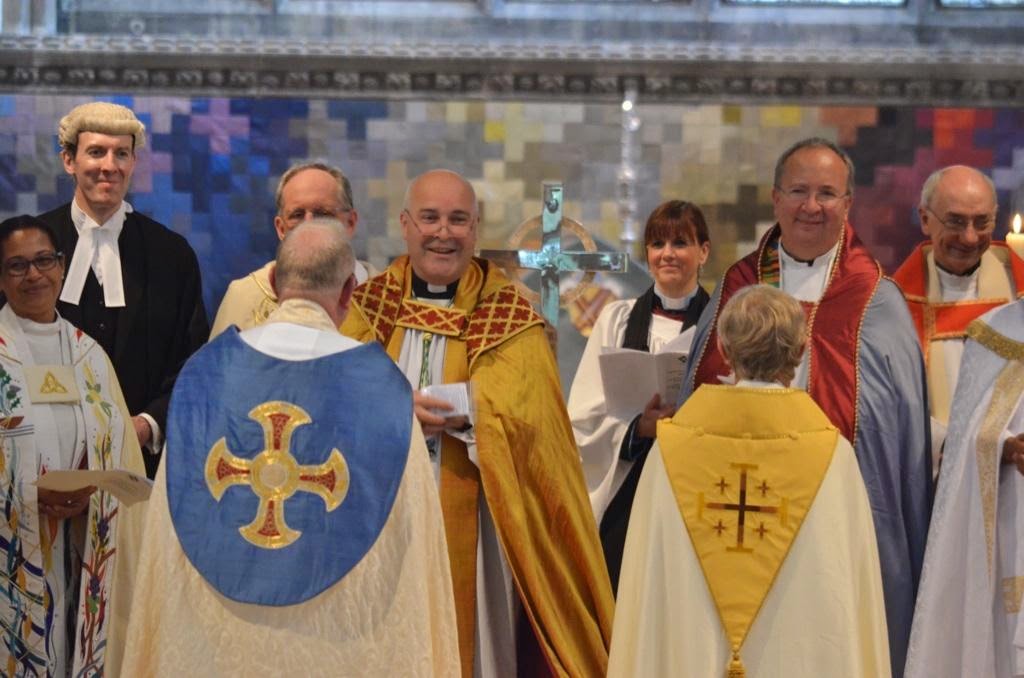 It is still a formal shot of a formal event, but it is much more engaging, don't you agree?

My point is this. That second picture is no less 'real' than the first. It wasn't taken as a token gesture, and it includes the people it does because they were the people who were there. But the photographer didn't think to include this picture at first, because the other is the conventional image chosen in these circumstances. Only when asked to think about the idea of some branding guidelines - trying to include some diversity in the pictures chosen for press releases - did s/he pick this picture.

So I think we should, as a church, hold ourselves to some self-imposed branding guidelines in the pictures we choose to publicise ourselves to the world with. Examples might be: all pictures should, where possible, include at least one of both men and women, or young and old, or different colours.

The idea is certainly not be to create an artificial image of the church, but to make us look afresh at the very real church we have, and choose pictures that show her as her bright, vibrant, welcoming, real self.

Even though our bishops are all men at the moment, they are part of a wonderfully diverse church: let's show that, to properly celebrate and affirm their, and our, ministry.