I woke up this morning with a feeling of immense gratitude for the welcome I had received in churches as a child. I've no idea whence or why this feeling washed over me today, but there it was.

I wasn't a 'practicing Christian' as a child. I wouldn't have said I had a faith even when I was going to church pre-about 12 or 13. I left at that age when I was having confirmation classes and decided I didn't believe a word of it (only to have to eat my words when I had a conversion experience at university - closely followed by feeling called to ordination).

So what was that welcome that I suddenly felt so grateful for today? As I analysed it, I realised it was made up of some very small things indeed - and that those were hugely encouraging for our practice today. Small things that we do can have a huge impact years later, an impact that we'll never know about. Here are some of the things that, looking back, were important to me, and that might be important for those we are doing them for now: 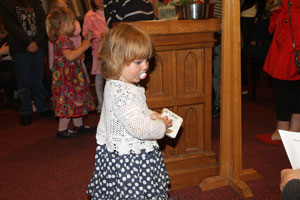 1. My baptism - and specifically, my baptism certificate. I don't remember this, obviously, as I was only about 6 weeks old at the time. My parents weren't religious, so presumably this was a fairly conventional service for a random local couple coming to celebrate their new baby. The kind that its all too easy for churches to feel used by, as they never see them again.

True, I don't think Panshanger United Church ever saw my parents or I again - if only because we moved 18 months later, before my sisters were born. But they gave us a baptism certificate, and that was stuck, by my mum, into my baby book. Now I don't know if you have a baby book, or looked much at it as a child, but I remember reading through mine regularly - as indeed my daughter does now. Mine had blank pages for adding pictures drawn by the child on each birthday, so at least annually it came out for my latest artwork.

So from an early age, I read and re-read my baptism certificate alongside the account of my first tooth, first words and favourite foods. I read the promises that had been made by my godparents that were referred to, and the blessing prayer that was there for me. It didn't convert me, but it was certainly something that I knew was part of my identity from an early age. (I remember when I became a Christian, I had a very strong sense of reclaiming my baptismal identity, which really took me by surprise!).

Practical point to take away? The baptism certificate you give a family might be really, really important. Get a nice one, bearing in mind what it will say to a 5 or 6 year old child reading it for themselves. Suggest they put it in their baby book.


2. Brownies in the church and church hall. Again, we often think of the 'user groups' that use our church buildings as useful payers of rent, maybe as part of our useful service to the community, but not necessarily as part of our mission and outreach.

But when I think back to churches of my childhood, attending brownies weekly in the church and church hall is one of my key memories. And whilst it wasn't about religion (there may or may not have been church parade at that point - I don't remember it though), we did meet not just in the church hall, but also in the church itself. And that gave a very physical sense of welcome.

My six, I remember, met behind the back row of pews on the left hand side of the church. The pews, the altar rail, the organ - all the accoutrements of church architecture - have never felt alien to me, because from an early age they were a space that I was welcomed into and felt a sense of genuine participation in - even ownership of  'my' corner.

Practical point to take away? Let groups use not just the church hall but the church itself. Just being in the space is important.

3. Bellringing. When I was 9, we moved from the outskirts of London to a little village in Lincolnshire. Our house was right next to the church and churchyard, and bell ringing practice on a Friday night was loud! On the principle that rather than have to listen to it, it would be better to be doing it, I turned up at the tower one night. They welcomed me in, taught me the ropes, and inducted me into the rather beautiful mathematical patterns of change ringing. There was never a hint of being patronised. I left when I left the church - to my 13 year old logic, it was inconsistent to call people to worship that I didn't believe in (boy was I an angry teenage atheist!), and they were lovely about that, too.

4. Reading the lessons in church. Because this was Lincolnshire in the early 1980s, there was nothing to do on Sundays, and I mean nothing. My family didn't even have a television. So I started going to the church that was 50 yards from our back gate, if not every week, a fair bit, from the age of 10 to 13. Often it was just my sisters and I (for a while they sang in the small choir -see bellringing. They particularly enjoyed singing and being paid for weddings!). One of my hobbies at the time was drama and public speaking, and someone at the church obviously either knew this, or took the trouble to ask, because they asked me if I'd like to read the lessons. It was really lovely to be asked to do something that was relevant to who I was and the particular skills and interests that I had. Well done, St Guthlac's in Fishtoft!

So that's the practical point to take away - find out about the actual children you have, and what they enjoy and are good at, and let them use their skills.

None of these things are hard. You're probably doing all of them already. And that's the point I want to make - keep doing them, be encouraged, and don't be downhearted when those children leave and you never see them again.
Sandra Miller, talking about the Christenings Project, makes the point that the family and all the guests attending a baptism probably won't come back to your church. But do a good job, and you may well be one of three or four occasions that person has gone to church that year, and they may well end up going to a completely different church again - if not that year, maybe decades later.

Trust that the seeds you are sowing might grow a lot later.