Today’s been the day of the #JustAPriest25 hashtag, started by Jules Middleton 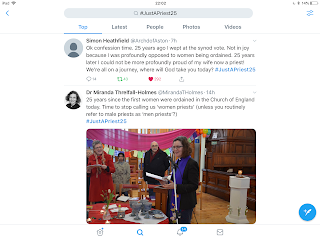 It’s the 25th anniversary of the first women being ordained as priests. But why are we still so often referred to as ‘women priests’?

At first, I must admit, I didn’t see the problem. A woman being a priest, after so many centuries, is something to be celebrated. Let’s shout it from the rooftops as we swing from the chandeliers of a cathedral! Women bishops were a rallying cry for so long that you get used to the weird syntax.

But when you think about it, ‘women priests’ is a weird way to put it. There’s a simple test - would you say ‘men priests’? No. You might, if gender was particularly the issue at hand, say ‘male priests’ or ‘priests who are men’, but not ‘men priests’. It just sounds wrong in English. So why ‘women priests’?

It’s a subtle reminder of male normativity. Saying ‘women priests’ assumes most priests are men, that’s the norm, and we women who are priests are something slightly different.

Well, 25 years in (25 years into a recurrence of something that seems very likely to have happened in the ancient church - see Gary Macy’s book if you’d like to read up on this) it’s time to stop this nonsense. When gender is relevant - maybe you’re excited that a woman is coming to be your vicar, or you want to know whether the celebrant is male or female because you have reservations catholicity of women’s orders - let’s talk about male and female priests. But otherwise, we’re just priests from now on.
Posted by Miranda at 22:01