I’ve just been writing an appendix about how to run an online course for my forthcoming book on reading the Bible (pre order it here!), and I thought it might be useful to blog it. 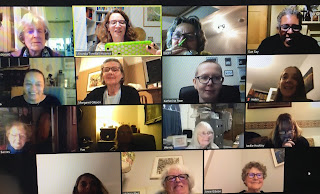 I’d encourage you to think of some of the things that are different about online meetings as features, not bugs.

Online, people are always free to turn off their camera, and/or mute themselves, or simply unobtrusively leave, as they wish. This puts them in control in a new and liberating way.

Online, we have entered into their space and are a guest in their home, rather than the other way round.

So here are 10 practical points to think about:

You can advertise an online course in various ways: create it as an event on Facebook, advertise it on your website and other online places, and perhaps ticket it on Eventbrite or a similar platform (which is free if you make the tickets free). Any of these methods enable your congregation, family, friends and social media acquaintances to share the link easily (do encourage them to do so!).

Recruiting this way can mean that people you have had no previous contact with might join you, from all over the country (or indeed overseas). Do be aware of this in how you run the course. It is a great missional opportunity, but you need to be prepared to be joined by people who may have very different levels of knowledge of the Bible or of Christian faith, and very different life experiences. Remember that people who have joined by simply seeing the link online might not be thinking in terms of joining a local church group; they may have seen the link at third or fourth hand, and just be thinking of it as on online course on an interesting topic. If so, be careful to treat them as equal participants, and avoid in-jokes and letting discussions of the local church or area predominate.

My experience is that, although people often worry that online relationships aren’t going to be as good as ‘the real thing’, they will get to know each other very well indeed over the course. Meeting online seems to create a particular intimacy amongst scattered participants, perhaps because they are each meeting from their home ground, and/or because they are used to using the online space for personal discussion and self-revelation in social media contexts.

The fact that people are labelled with their name is hugely helpful for those of us who are not good at learning names. It’s also brilliant in that awkward situation when don’t want to offend someone by asking their name when you’ve seen them around in church for years!Do ensure that you ask people to label themselves online with their real names (whatever variant they want to be known as). Sometimes people enter a meeting with a default label such as ‘dad’s ipad’, or are using someone else’s account or device so come on with a completely different name or a company name, and that can be very confusing for participants. If they don’t know how to rename themselves you can do that yourself as meeting host - just ask their permission to do so, and ask them to write in the chat what name they would like you to use (great if you’re not sure of their name yourself!). Similarly, people can use the name field to specify their pronouns if they wish to do so. If you don’t know everyone in the group, inviting people to do this is a great way of signalling that this is an inclusive space.

The timing and dynamics of gathering are rather different. In a physical meeting, there is often a substantial period of time over which people arrive, during which we’d make a hot drink and catch up with how people are. Online, people tend to arrive promptly, and there is less appetite and scope for general chat. So whilst for a physical meeting I’d open the church or meeting room half an hour before the advertised starting time, an online meeting room only needs to be opened 5 minutes in advance.

Again, in a physical meeting, I would often begin with some general greetings, and some worship - a song, some simple liturgy. This functions partly to set the mood, and partly allows for late arrivals! Online, however, we found it worked best to greet people, and then get straight down to business, with simply a short opening prayer.

Communal silence - though it can be powerful - does not work in the same way in an online group. Keep it relatively short unless it is the whole point of the gathering. If the latter, it can work really well – a group in our parish is meeting weekly to be led in a time of silent contemplative prayer. But where that isn’t everyone’s expectation, keep it short – a minute silence online has the impact of 5 minutes silence in person.

Whole group discussion can be intimidating with a sea of faces all looking directly at you, and you can’t simply ask people to turn to their neighbour and discuss something for a moment. It is not possible to have simultaneous conversations in the main group, and it is harder for people to sense when it is their turn to speak.

For substantial discussion, it is best to have a version of your conferencing software (eg pro Zoom) that allows you to put participants into smaller breakout groups. You might then ask someone to feedback from each group. You can either plan who is going to go into particular groups in advance, or allow the software to allocate people randomly - and if you do the latter, you still have the option to move people between groups when you see the groupings. Consider placing somebody in each group who you have asked in advance to take on the role of chair or facilitator. Practically, it is advisable to have a co-host for the meeting who is organising the breakout groups whilst you are leading the first part of the session.

Don’t forget that the chat facility is also useful for doing discussion differently. Using the chat, people can add comments or questions as they occur to them, and then they can be discussed at a later point.

Some people are much more comfortable formulating a comment in writing, so it is helpful to offer both ways of engaging.

Again, it might be helpful to nominate somebody whose job it is to monitor the chat and identify questions, themes or topics to be discussed.

A particular feature is the ability for participants to have simultaneous conversations, alongside or even totally ignoring whatever you have planned and are delivering as group leader(s). In a physical meeting this would often be considered rude or disruptive, but online it is normal ettiquette for people to give simultaneous comment or have additional conversations. Try not to be put off by this, but embrace it. It is a democratising feature of online meetings, blurring the boundary between who is leading and who is receiving – and that’s a good thing.

Finally, don’t forget to build comfort breaks into an online session just as you would if meeting in person, and encourage people to get themselves a drink at that point.

Do give it a go. We've had Bible study, retreat days, silent contemplative prayer, meetings and are now planning Lent courses all online. Obviously not everyone can attend these, and it is important that other things are put in place for those folk who aren't online, but don't let this put you off doing this for those who can benefit. (And see Bryony Taylor's blog for other ideas such as dial-in church).An entry-level smartphone  or tablet is quite good enough for people to join an online course, and online opens up attendance to many people who would have been excluded from what you normally do, such as those who are housebound.