Ever since reading Richard Holloway's book 'Dancing on the Edge' (when I first became a Christian at university), I've loved the idea of truth being found teetering on the knife edge between one false certainty and another.

That image became even more vibrant and alive for me when I started having ice skating lessons. I was about 25 and doing my doctorate, and needed some sort of active exercise to give me a complete change from my books. I lived in Newcastle at the time, just a few stops down from the ice rink on the metro, and I'd always loved Noel Streatfield's books as a child, so the idea of acting out my White Boots fantasy suddenly seemed a sensible one! Well, I was never any good, and I soon gave it up due to it being too expensive a hobby for me on my PhD grant. 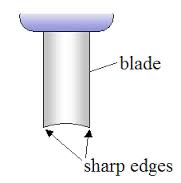 But what I did discover was that ice skating blades are not flat - or even sharp - on the bottom, but are made up of a double blade (a bit like a double-hulled catamaran). You basically never skate on the whole blade, but on one edge or another - so you are always moving forwards in a series of curves, sweeping one way or another. And of course, like cycling, you are never balanced properly unless you are off balance but moving swiftly enough to create balance.

It seems to me that this is a good image for our faith, though I don't know if the specific ice skating image was in Richard Holloway's mind when he wrote that lovely title.

We only move forwards by being on the edge; we only create balance by moving fast enough not to come crashing down; we only make progress by sweeping curves.

I have seen some commentary recently on social media (and forgive me, but I can't remember where now - someone may helpfully put it in the comments?) suggesting that the point of faithful Christianity is to 'guard the deposit' of faith that has been handed on to us. This instantly set my historical antennae twitching. It's a sweeping generalisation, but broadly speaking the Western Christian tradition has seen faith as something that develops, whilst the Eastern Orthodox view has been that the tradition stopped developing at the last of the great Ecumenical Councils, and the task is now simply to pass it on intact. This was the fundamental point at issue in the 'filioque' debate for example - the Western (anachronistically, the Roman Catholic) Church claimed the right to add that small phrase to the creed that had been agreed by the Councils, whilst the Eastern church denied that was a valid thing to do.

Hence the title of this post. Is faith, for you, more like ice dancing or musical statues? Does the music stop sometimes - perhaps for the last few hundred years, or the last millenium - and until some cue says it should start again, the task is to hold still, faithfully in the position you were in when the music stopped? Or is it a continual dance, a backing and advancing, side to side swaying, dancing on the edge, beautiful as a dance rather than necessarily aiming at striking a particular pose
?
Posted by Miranda at 22:41