Patrick Holroyd is the Reader at St Mary Magdalene, Belmont. 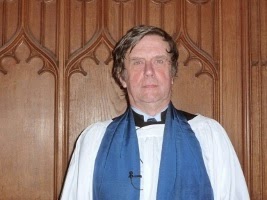 This is the sermon he preached on Sunday, on the healing if the demon-possessed man from Luke 8. It is so unusual to hear depression and mental illness openly discussed in Church, that several people asked us to make it more widely available.


"I am sure that you will agree with me if I say that of all the components of our bodies, our brains must be THE most wonderful. Within these God created bodies, our brain is the part which is most marvellous. Just think about it. Within our skulls lies a concentrated mass of complex biological circuitry that puts into the shade the greatest programs ever designed by Microsoft and the rest -- all put together.

Our brain is the means by which we exist. Right from conception it controls the way we have developed. It has enables us to grow both physically and spiritually. All our life’s memories are stored there, and there is the capacity to process those memories and the information we are constantly receiving throughout our lives -- to create the people we are. It is there where we connect with the world and where most joyously we come close to God and learn His Will for us.

Yes, our brain is the centre of our existence. Without its continual information processing we would die. Thankfully for the vast majority of us this work carries on unconsciously. But sadly, for some, this does not happen. For various reasons, in some people the circuitry goes awry and they fall ill. I am sure that many of us here today can think of people for whom this has happened, and for whom we are praying for God to be with them. I am particularly thinking of my niece Zoe and her family at the moment. Zoe is subject to fits and doctors are right now undertaking scans, looking at her brain to try to locate the area which is not working properly. We in the family are hoping that this can be found soon and the problem resolved, for life is very hard for her with a young family. But it is one of the miracles of today’s expanding medical knowledge that in most cases we CAN now correct such so called mental illnesses and the patient restored to a normal life. So we live in hope!

But Zoe is only one of thousands of people who have mental problems which affect their lives. Stephen Fry, for instance. This well known entertainer suffers from a severe form of depression so debilitating that he only recently was led to thinking about his future. And then there is Katharine Welby, daughter of our beloved Archbishop. She recently opened up her life to the public and has spoken of the depression which has affected her life.

Depression IS a severe strain on people’s lives and one which leads to much drastic thinking – even about life itself. But it is NOT an illness which is untreatable. I, myself have felt its effects and can assure you that with the right treatment and support from those around, it can be controlled.

And what does our Gospel reading today, the story of a man whom Jesus cured from such an illness, tell us? Here we have someone whom `Doctor’ Luke tells us was “demon possessed”, a Biblical phrase often used to talk about afflictions of the mind. He had been thrown out of his society – who did not understand his problem – and had resorted to living in caves. So severe was his illness that he had no thought for his looks or his health. He merely existed. But though the man’s society did not understand what was going on, Jesus WAS concerned, not only to comfort him, but also to cure him. Jesus understood, as He understands and sympathizes with all those who are suffering mental problems today. He knew that the darkness of illness COULD BE REMOVED. And so in the story we see Jesus demonstrating the power He has over ALL illnesses by curing the man and symbolically causing a herd of pigs to inherit the illness and throw themselves off a cliff.

Depressive illnesses are one of today’s great medical problems. But the message I want to get over to you today is that while such illnesses are difficult, both for the sufferer and their families, they are something of which Jesus is much aware - and can share in. He has been there and has felt its effects. Think about His time in the Garden of Gethsemane on the night before He was crucified. On that night Jesus Himself felt the full darkness of depression fall on Him when, alone with His Father –-- the disciples did not understand and were asleep –-- He felt life was too much to bear and prayed for release from what He knew He had to do. But God did not do that. Instead He gave Him the support which enabled Him to get through the next day.

And it is surely one of the greatest comforts to those who are in dire distress, to know that, just as Jesus was able to ride out the despair of crucifixion as the preparation to the joy of resurrection, so we have the support of Jesus in our times of dark.

And what is more to us here at Belmont, we have in our own Mary Magdalene a potent example of the hope and joy that can come from release from the darkness brought on by illnesses of the mind. Our Patron Saint was herself cured of “seven demons” and received the supreme joy of being able to follow Jesus with lightness of heart and love of spirit. I believe that these “seven demons” of hers were some form of depressive illness, just like the man in our Gospel. And, as with the man in our story, Jesus released her from her troubles and enabled her, as Jesus told the man, to “go into the world to tell what God had done for her”.

And so how can we here in church today help in this work of healing that Jesus has so forcefully shown us this morning? We all know people who are going through hard times as far as their health is concerned. Many try to cope with the dark and lonely times. But all could do with the help of friends – friends who, like Jesus, do not criticize – who do not say “pull yourself together” - for that common reaction of society is the last thing such people want to hear. Such depressed people CANNOT pull themselves together – that is the nature of the illness. No, ill people want to have supporters who will seek them with a smile and with warm words.

Katharine Welby said in a recent interview, “God created everyone. We are all designed in His own image. That is true of a person with Autism, with Cerebral Palsy, or with Bipolar Disorder, just as much as it is with those who are free from any illness. Everyone in the world gives to the world a glimpse of God, the God who created us and gave us such different characters”. May that God give to each of us today the ability to come close to those with mental problems, the opportunity to see God working in those important lives, and to treat everyone as though we were meeting Jesus Himself?